I've been given the assignment to prepare a flight from EBZH -> Geel -> Turnhout -> EBKH -> EBZH.

It will also be the first time I land on another airport than EBZH!

As a preparation, I have already drawn my flight path on a Low-Air VFR map (1:250.000). I need to watch out for the EBBL (Kleine Brogel) military CTR, which is on the west side of the E313 highway.

Additionally, I have to avoid two danger zones: R03 above Diest (EBDT) and R16 above the nucleair facilities of Mol.

Of course, wind must be factored in on the day of the flight.

All of this needs to be verified with my instructor of course.

For practice I took the map and my instructions and tried to fly VFR in FlightGear, an Open Source flight simulator (because X-Plane doesn't run on my laptop).

The scenery is sparse but it accuratly shows the location of highways and water, and large cities look a bit gray compare to the rest.

There were a few times I wasn't sure of my position, but looking at the map including the 3 minute time markers allowed me to find my way back.

What I find hard is to identify on the map what will be good landmarks to orient with, because it's hard - for me - to predict what will stand out and what will be hardly visible.

For example EBZH, the airfield I usually fly, doesn't stand out very much in the scenery since it's surrounded by trees. But a large field, used each year for the famous "Pukkelpop" festival clearly stands out and is right next to the airfield.

Highways should be clearly visible (at the altitude I fly) as will water. But you never know.

Eventually, I managed to complete the route but I had some close calls with airspace violations over Mol and EBBL.

In the simulation, I flew over an airfield "EBOT" which I wasn't aware was on my route.

Turns out this is a closed airfield in Oud-Turnhout.

Well, I spent 45 minutes instead of 40, but I did circle EBKG (instead of landing there).

I'm not ready yet. I still need to prepare some kind of flight log, where I list every waypoint and the time to fly each leg. Fuel usage. etc ...

I also need to find aerodrome charts of EBKG and note all necessary radio frequencies, which I expect will be: Hasselt Radio, Brussels Information and EBKG's radio. 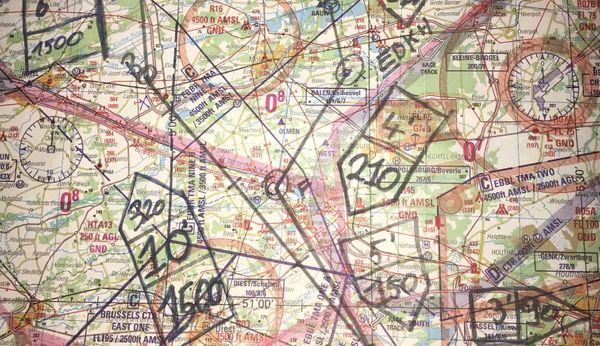 Yesterday we went flying from EBZH over Geel to Turnhout up to EBKH and then back. The navigation by itself went quite well, my preparation was mostly correct and it was quite easy

We flew circuits for another hour. Nothing special ... were it not for the fact that 54 minutes of the hour I flew solo. I was nervous because I knew I was going to