Yesterday we went flying from EBZH over Geel to Turnhout up to EBKH and then back.

The navigation by itself went quite well, my preparation was mostly correct and it was quite easy to identify the important points on the ground.

I didn't realize I was going to be allowed to use the compass on the GPS system in the plane. I thought we'd only use the magnetic compass. In that sense I didn't expect us to fly more accuratly than maybe 5 or 10 degrees.

But we did, so I had to focus on flying the course quite well.

Normally what you do is when you are on course look at a point in the distance and fly towards it. That's actually not so hard - but you have to realize it.

Things that are easy to navigate with - in Belgium at 2000 ft - are: waterways and other water, highways and other big roads, cities.

The "Albertkanaal" is nog extremely visible on the map (but visible) but while flying it is very easy to see. Luckily is passes by Hasselt so when in doubt, following that channel would be a way to find your way back.

My instructor explained that in the past the view wasn't usually as good as it seems to be these days. I suspect air quality has improved, removing smog from the air.

When visibility is lower, course and timer becomes a lot more important.

It was actually quite uneventful. We listened to "Brussels Information" during our flight. Picked up one conversation and adjusted the QNH to what we heard.

It was really great to fly a little further and more straight.

Sadly, the airfield where we were to make a stop (EBKH) was closed. We did not know before we arrived: airfields have a signal square and a yellow X means it's closed.

Instead of landing, we did a "low approach" where we do everything as if we were going to land, execpt actually land.

When starting I did some dumb things wrong - I think I was so focused on the navigation of the flight I forgot to remind myself of the basic routines. I had a three week break due to weather which didn't help either.

Some things I did wrong:

During navigation, I found it a challenge to keep track of where exactly the wind was coming from and anticipate on that.

I also found it a challenge to stay on course within a 5 degree margin.

We had quite some cross wind on landing. I corrected for it quite well on the approach, but after the landing the wind drops and I didn't compensate enough for that, sending me slightly to the right.

My planning underestimated the time our trip took though. I counted on 40 minutes flying but it was around an hour.

My chart and the directions were clearly marked. I also noted the radio frequencies I would need, so they were easy to find when I needed them.

I bought a knee-pad which I could straf to my knee and hold the chart and additional info on the airfield we were visiting.

It was easy to identify where I was most of the time, because I had prepared well by looking for possible landmarks on the map. We also tried to identify things we saw on the map.

As far as basic flying was concered I kept the height reasonable well - but could be better though.

The next flight will be "practice forced landing". Where my instructor pulls the throttle to idle to simulate engine failure.

What I do then is:

This is scary stuff, and really important too. Perhaps THE most important thing to master.

Compare this to my try-out in FlightGear: 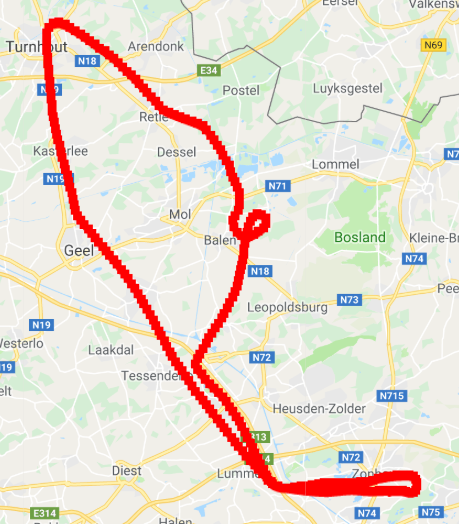 Today we practiced "Forced Landing", also known as the "Emergency Landing". Part of it is a manoeuvre called "Slipping". It's a little scary stuff, not so much

For my tenth flight, normally coming wednesday, I'll be doing my first Navigation flight. I've been given the assignment to prepare a flight from EBZH -> Geel -> Turnhout ->