I had originally planned a sunday flight, but the weather was off. It's a little hard in winter to find good time slots to fly. Days are short and the weather is generally not very good.

Today, however, they had forecast low clouds and freezing mist. But it was much better than that luckily.

It was cold and hazy, but still sunny and there was a very slight easterly wind.

I was pretty much alone there during noon, except for the field commander and another pilot that arrived.

During pre-flight, I noticed some dust in the pitot. I called my instructor to double check, but I was able to remove the dust from te pitot. Luckily, I know not to blow into it!

The pitot is super important because it enables the airspeed indicator. Airspeed is vital information during a flight.

It looked fine, but to be sure I mentally prepared for a failure of the airspeed indicator. What you can do then is use the normal throttle settings and nose attitude and bring it in for a landing.

Luckily, that was not needed and everything worked fine.

The flight, for the rest, went great. Uneventful and relaxing, how I like it. The air was very calm. I couldn't see very far, but it was still a good looking view.

One tick that tripped me up a bit, on one of my approaches on final I started to think about something else than flying the plane. The approach was going fine and I staid right on the airspeed, the landing was also great. But I don't really like that it happened. In one way, I think it means it is becoming a bit more habbit (like driving a car) but in another way I don't want to accept anything but 100% focus, especially during final.

So I will pay attention to that.

I did three touch and go's and one full stop, which as far as I could tell went very well.

I also fueled the aircraft! Seems obvious, but I've always done that together with my instructor and a few things I hadn't actually done before. But that was fine too, although I have to use a step-ladder and my instructor doesn't!

Down-side of a cold day, took me almost 10 minutes to warm up the engine. I wish it could be pre-heated with some cleaner energy.

So that was a good day, did everything by myself, good landings, fueled up, cleaned up, parked it back into the hangar.

What I'm doing now is building up routine, I think I'll stick to short local flights when I can get them for winter, and when weather permits plan some longer flights in spring. 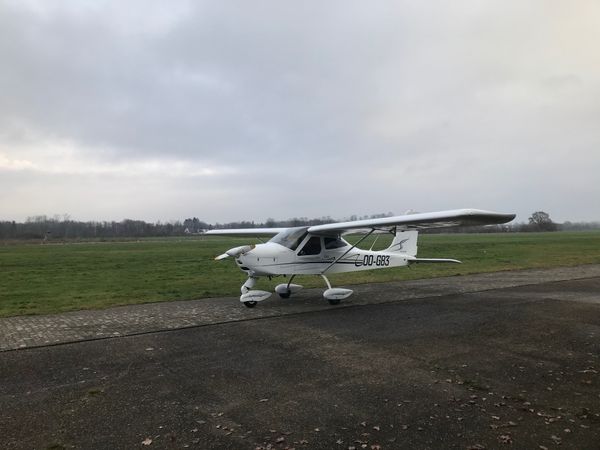 Short solo circuits in bumpy air with some cross wind, building some routine and confidence.