As planned, we were either going to fly to Theux (EBTX) or do solo flying.

Since EBTX was closed when I was flying, and the weather was good, I got to do some solo flying.

I got to do touch-and-go circuits and if I wanted to I could take a little trip around Hasselt (the city near the airfield).

Obviously, I was a little nervous. I have flown solo before, but this time my instructor didn't even join me for one lap first. I got to do the whole thing myself.

The days before were really great, clear skies and no wind. This day there were still clear skies but there was some wind, 7 kts coming from the east.

Luckily, the runway faces east (runway 09) so I could take-off and land head-wind. Which is a lot better for landing than when there is a cross-wind.

I though to sound a little more professional when I tried to contact my instructor on the radio.

And somebody - not my instructor - replied: "Reading you five"

My instructor responded: "reading you five".

So that was a bit clumsy of me! Lesson learned :-)

Incidentally: "reading you five" means they hear you perfectly well. There's a scale from 1 to 5, in which "1" means you barely hear anything.

After doing my pre-flight checks, I started the engine.

Since it was cold outside and I was the first that day to fly OO-G83, I used the choke. This will help the cold engine start up by increasing the fuel mixture.

After that, I released the choke and increased the throttle a little to ensure the engine kept running.

When it's cold, it takes a while to warm up the engine and the oil pressure to come into "the green". The oil on the Tecnam P92 Echo doesn't get super warm, so it usually stays in the yellow but it has to be > °50 C. So I let it run at about 2500 rpm for about two minutes. Then I started my taxi to the holding point, runway 09.

Coming at the holding point, I pulled the throttle to "idle". This caused the engine to stop.

Since I was alone, on the radio I asked my instructor, he said to start the engine again, it was probably a little cold. It started without issues.

I then continued my "run-up". This involves letting the engine run at 4000 rpm and disabling each of the 2 "magneto's" individually to ensure they are working. The magneto's provide a voltage to the spark plugs in the engine, so they are vital. If one of them doesn't work, we're not taking off.

After the run-up, I made sure to pull the throttle as far idle as I could, but it kept running now. But it was a little strange.

After that, my instructor called me on the radio and asked me to restart the strobe light. It "hung". I presume maybe because of the engine restart.

So I took off for my solo circuits.

I was alone (I'm a very light person), it was colder, I had a head-wind. It felt like I was going up almost vertically. I was at 500 ft in NO TIME.

My first landing though, wasn't very good. I was low and leveled off too high. My instructor called me to tell me to ensure I keep my airspeed up long enough. It has to be 100 km/h (the tecnam shows the speed in km/h, not kts).

My subsequent landings were a lot better. I watched my airspeed.

At some point, I decided to leave the circuit and fly a little bit. But I was alone so honestly I was a little afraid to go far. I made a little detour and quickly joined the circuit again. I was afraid I would suddenly lose my orientation. Which, actually, isn't so easy thanks to the "Albert Channel".

Joining the circuit again, I went on to do two more landings.

In my last circuit, for some reason, I decided to concentrate on a certain sound the aircraft was making and I spooked myself out a bit. I convinced myself either my rudder or flaps were broken!

Afterwards, everything was clearly fine, it was in my head. But I couldn't do much more than stay calm and keep flying anyway. I did keep a close eye on the surrounding fields though! With the engine shut-down at start, I wasn't THAT comfortable! It was the first time I had something like that.

All in all, except for the first landing and the clumsy radio stuff, it went quite fine.

Flying solo is clearly an extra factor of stress.

Interesting GPS tracking, where was I here?! 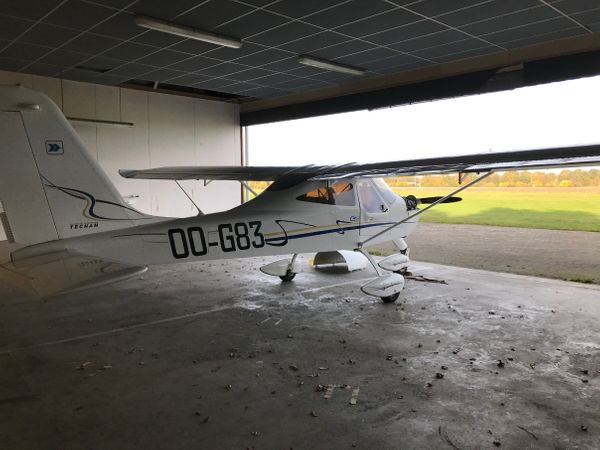 This flight, we finally performed my navigation flight EBZH (Hasselt) to EBTX (Theux). I had prepared my trip up front with a straight line up until Verviers. We cross Bilzen and Visé. It

The plan today was to either to solo-circuits or a trip to "Theux". I had already prepared my navigation flight, and in general it was OK. I got some pointers on what is