Given my not that great flight last time, I want to review the circuit for myself. 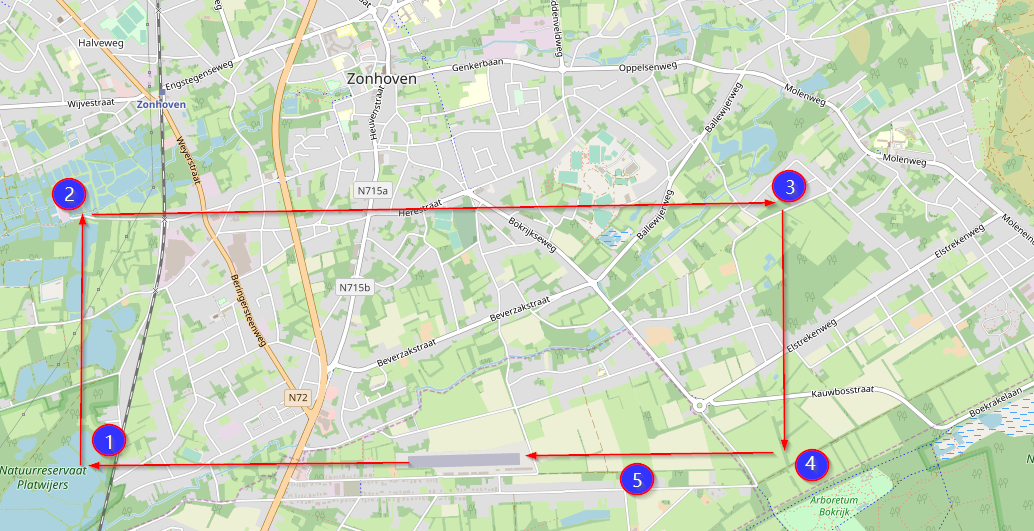 Apart from the take-off, these five points are important points in the circuit.

Warning: I'm still learning a lot, so some things may be simplified. Also, the tecnam ULM is probably a little different from a Cessna or other PPL plane.

Before the departure, first the exterior check must be done:

Put plane outside and follow the check-list until ready for taxi.

On take-off, we push "full throttle" and quickly get the nose up to the horizon (this barely lifts the nose wheel). This will allow the plane to take-off when "it's ready".

During take-off, a great amount of right rudder must be applied. I seem to be doing that OK until I take-off. I found this video that I think illustrates my mistake. The part where she says "if the instructor tells you MORE RIGHT RUDDER and you look out and can't even see the runway, this is what happened to you" ...

After take-off, we must ensure to lift the nose higher and higher as to stay in the "white band" of IAS (Indicated Air Speed). This is the speed you can fly when the flaps are out.

After climbing to 500 ft we can pull the flaps up. At that point, the nose wants to come down and we should keep it in the same position by pulling the stick back.

At 1000 ft we make a right turn but keep climbing, during the turn we probably reach 1100 ft at which point we must start flying level and level off at 1200 ft which is the circuit height.

While leveling off, RPM of the engine must be reduced to 4500 RPM for level flight.

Then we'll reach point nr. 2, which can be identified by the tennis fields on the right-hand side. Since we're flying VFR (Visual Flight Rules) we use reference points on the ground for the circuit.

At point 2 we turn right again, keeping the plane level, to enter the "down-wind leg" of the circuit.

When entering down-wind, we must announce ourselves on the radio:

This way, other pilots in the area know where they can expect us.

The down-wind leg starts when the end of the runway is on your right-hand side.

While flying this leg, we maintain altitude and RPM. This is a good time to trim the nose.

Trimming will make sure you don't have to always push or pull the stick to keep the nose in the correct position. You can then release the stick and the nose will stay on the attitude, which makes for a more comfortable flight.

We'll reach point 3 in the figure at some point, which is the start of our Base Leg.

There's a big pond on the left and a small one on the right that can be used as reference.

When reaching that point we pull the engine to idle. At this point, the nose wants to come down but we must pull the stick back to keep the nose up so that we maintain a vertical speed of 0 fpm (feet per minute).

This allows us to lose speed until it reaches the white band.

After "about three seconds" of pulling idle, we must make a right hand turn while still maintaining our 0 fpm.

As soon as we reach the white band we can set flaps half-way. After that, we should maintain a speed of 100 km/h. Since the engine is idle we control the speed using the attitude of the nose. Doing this will result in a descent of about 400 to 500 fpm during the base leg.

Oh yeah, we announce on the radio: "Golf Eight Three Base"

We'll see the runway on the right hand side and we must turn right at the right time so we end up facing the runway.

This is when we enter the Final leg.

This is where we must judge if we are too high or too low. If we are too low we can increase the throttle while maintaining the same nose attitude (keeping an eye on the speed).

If we are too high we may need to set full flaps a little earlier than usual.

At some point in the final leg we must set full flaps which will increase drag and slow us down. We still maintain around 100 km/h for the landing.

This is really the part where it's about timing. At some point, you must raise the nose up so that you reduce speed while just above the runway. Then wait until the plane starts decending again and then keep the nose up.

I do two instinctive mistakes here:

In a touch-and-go, as soon as you are on the ground you must push full throttle. In the Tecnam P92 this almost immediatly puts you in the air again. We keep the nose on the horizon until we are going up, and APPLY A LOT OF RIGHT RUDDER.

Quickly, we must put the flaps half-way again for the rest of the take-off.

This is where I make the mistake of losing focus on the nose attitude. I let it go up or down too much, which is really bad at those low altitudes. So I must pay attention to this.

As soon as we reach 500 ft everything happens all over again.

For a full stop landing it's all the same, just instead of pushing down the throttle: keep the nose up and gently apply brakes and taxi to the apron.

I'm doing this routine in my head at least once a day now, and I'm hoping it will pay off on saturday (if we're flying).

I was a little nervous for this flight, given my reasonably poor performance last time. Luckily: the flight was great! It was a saturday morning, beautiful weather and a little bit of side-wind.

We did more circuits with touch-and-go's, however it didn't go very well, even though I kind of felt OK about it: my instructor was clear, and of course he was right. I made